How VFTA Assists the City 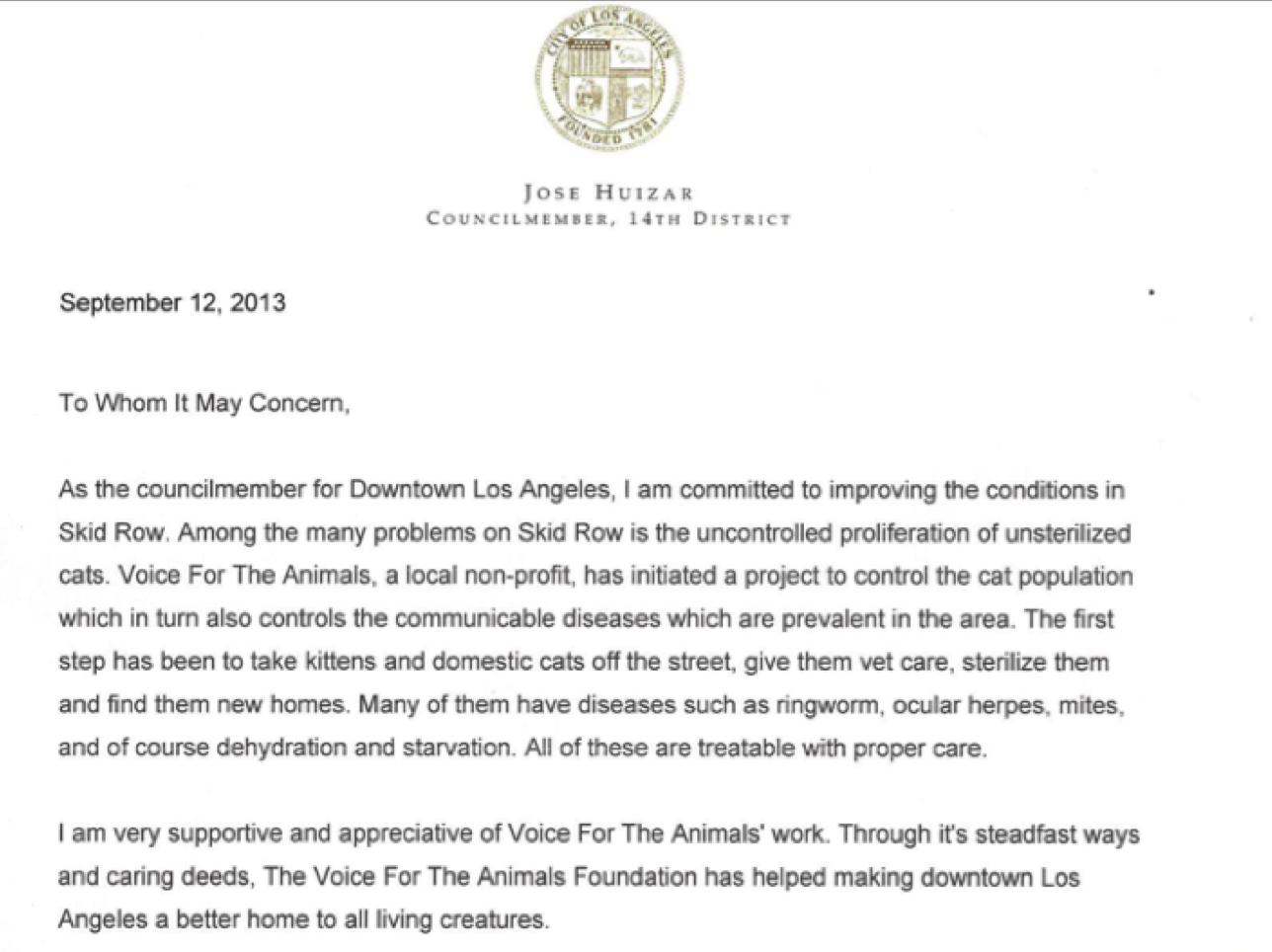 “I would like to take this opportunity to thank you for your involvement, your dedication, and most importantly, your generosity in providing the Foothill Area Station with our feral cats.

I knew from my previous experience as the commanding officer at Wilshire Area, that the problems associated with “pest control” are voluminous. However, with the introduction of these natural predators, we enjoyed a resounding success in minimizing and controlling the infestation of the rodent problem. Now, here at Foothill Station, the feral cats have once again proved their worth and succeeded in clearing our station of rodents in a controlled and non-invasive manner.

Your assistance with the introduction and acclimation of our feral cats has been  invaluable to our organization. As part of a large city-based entity, it would be difficult for our personnel to apply the knowledge, and time-consuming efforts, necessary to achieve the desired results. We have greatly benefited from your organization’s assistance and involvement in establishing our feral cat program. We couldn’t have done it without your help. Once again, thank you for your considerate volunteer effort.”

“Thank you for all of the assistance you and your great organization, Voice For The Animals, have provided in the past year. Your organization’s assistance in locating the victim and witnesses in the recent animal cruelty case in Pacific Area was invaluable. As I mentioned in our conversation, the Pacific Area detectives were able to make a successful arrest in that case.

I am especially proud of the training we worked on during September 2000. Your assistance with coordinating the training and getting Sergeant Schlueter was invaluable. Without your organization’s efforts, we would not have been able to put on the training.

I also want to thank you for bringing the students from several local schools to Pacific Station for the training and your. I am sure the experience was beneficial to both the students and Pacific officers alike.”

“I write this letter of recommendation as an animal advocate, as a private citizen, and as one who founded and presides over a 501(c) (3) tax-exempt corporation in Florida (The Sherry L. Shlueter Foundation, Inc.). But my acquaintance and involvement with the remarkable Melya Kaplan stems from my professional life as a sworn certified law enforcement officer (Broward County Sheriff’s Office in Fort Lauderdale, Florida).

Some years ago Ms. Kaplan learned of my unique work in law enforcement, which focused upon the investigation of crimes of abuse, neglect, abandonment and killing of animal victims. Ms. Kaplan made a “cold call” to me, telephonically introduced herself, then enthusiastically inquired whether I would consider initiating a pilot training program geared to instruct the Los Angeles Police Department officers about how to recognize animal cruelty and to conduct thorough, successful investigations into such complaints.

She was already working tenaciously “within the system” —-the city of Los Angeles, though essentially an outsider herself, traversing the many different obstacles of the kind only a government bureaucracy can dream up, trying to convince those in power of the need and importance of such training.

I marveled at her tenacity, her diplomacy, and her indefatigable spirit. And I assure you it took all of that and more to make the program happen —but happen it did, with great, exciting fanfare. She had somehow miraculously convinced the city commission, the mayor’s office, the L.A.P.D., and city and county animal services organizations, among others, to embrace not only the concept, but me! I received a grand proclamation from the city, arrived to a horde of interested media, and was featured in a L.A. Times newspaper article on the day of my arrival. I’m sure you can appreciate the significance of all of that, when aware that several of the factions Ms. Kaplan brought together to support the programs were actually very nearly at war with one another over other issues of a political nature. Who but Melya Kaplan could have accomplished that?

The pilot training program proved to be, as I understand it, a smashing success. But due to some of the many internal troubles with which the L.A.P.D. struggled, Ms. Kaplan’s dream of seeing every officer on the force so trained, was shelved for a couple of years. Never giving up, she resurrected the plan at every opportunity, and succeeded in orchestrating yet another, somewhat expanded, pilot training program intended to teach officers about animal cruelty investigations, the cycle of violence, and animal handling procedures. The latter was intended to teach the skills the officers needed to help them avoid being bitten by dogs they would encounter (officer safety issue), while offering alternatives to shooting dogs, a response which raised the ire of the community and endangered the public whenever it (unfortunately, frequently) happened (public safety issue).”

“As a private citizen and a prosecutor I have been witness to an astonishing change that has taken place over recent years in heightened awareness of animal cruelty (which include intentional cruelty, neglect, and illegal animal fighting) and the way instances of animal cruelty are handled by law enforcement.  A good deal of this change can be attributed to the efforts of Melya Kaplan and the organization she founded and directs, Voice For The Animals. Over the course of the last 10 years I have watched Ms. Kaplan tirelessly – and successfully – pursue the idea of instituting a special task force within the Los Angeles Police Department that would specifically address animal cruelty.  In 2005 this task force became a reality.  Made up of Animal Control Officers from the city’s Department of Animal Services and police officers from the Los Angeles Police Department, the task force has served as a model for police agencies around the country.  Since its inception the task force has been responsible for investigating thousands of instances of animal cruelty that, heretofore, might have been given short shrift.  Ms. Kaplan also helped serve as an impetus for the creation of a specialized animal cruelty prosecution program within the Los Angeles County District Attorney’s Office, a program that has been hugely successful in prosecuting a myriad of cases involving the mistreatment of animals. Ms. Kaplan can always be relied on to lend her considerable support and expertise to these programs and to any other projects where the mission is to promote the humane treatment of animals.  It is fair to say that Ms. Kaplan is an integral part of – and reason for – the profound changes in actions and attitudes that have occurred in Los Angeles regarding instances of animal abuse.  It is a true pleasure to work with Ms. Kaplan and I look forward to working with her and her organization, both privately and professionally, for many years to come.”

“I have closely worked with Melya Kaplan and Voice For The Animals for myriad years. During that time, I have personally witnessed huge changes and improvements in animal welfare that are directly attributable to the work and advocacy done by Melya and Voice for the Animals.  Although I’ve worked with dozens of animal rescue organizations and advocacy groups for the past thirty years, what distinguishes Voice from the Animals from other groups is Melya’s unique and truly remarkable ability to work cooperatively with government agencies in developing policies and procedures that improve the welfare of animals. Whether it’s the investigation and enforcement of animal cruelty law, the treatment of dogs and cats in our local shelters or the policies relating to feral cats…Melya’s advocacy work and her talent for bringing all the necessary parties to the same table has resulted in dramatic improvements in the way Los Angeles government deals with animal issues.  The existence of the LA Animal Cruelty Task Force and the City’s new focus on dog and cockfighting is a direct result of Melya’s advocacy, concensus building and willingness to focus resources where they can do the most good for animals. Moreover, Melya’s ongoing work with the Mayor’s Office, the City Council and LAPD has brought about huge and significant improvements in the way animal cruelty and neglect are dealt with. It is not an understatement to say that but for Melya Kaplan, the City of Los Angeles would still be in the “dark ages” regarding the welfare of dogs, cats, rabbits and wildlife.”

“Once Again, Ms. Kaplan brought diverse and reluctant entities together. We created a 16-hour training program, which ultimately reduced the previously alarmingly high number of dog shootings by officers down to nearly zero immediately following the training. But what is equally astounding about all of this is that these two pilot training programs for the L.A.P.D., which included evening community meetings to alert and educate the public to the issues and to their responsibilities as witnesses and reporters of these crimes, was not underwritten by any government entity. (The police officers, of course, attended on company time.) The costs of bringing me to Los Angeles from South Florida twice, and the associated costs of providing the training (though done at a reduced rate in the spirit of helping) were all covered through private donations and “complimentary” services or reduced rate accommodations acquired mainly by Melya Kaplan herself. As alluded to earlier, this second pilot program proved also to be a genuine success. The police officers were most appreciative of the immediately applicable training they received; the city and the involved agencies garnered praise and support from the community; and the very real violence against animals — both from the intentional abuse perpetrated by criminal offenders, and that initiated by scared cops shooting at loose dogs because they didn’t know what else to do, was significantly reduced. The one-woman dynamo who conceived of all of this and brought it to fruition twice, at no cost to those people who most benefited, is the incomparable Melya Kaplan, Executive Director of Voice For The Animals Foundation. She has many more grand ideas. She is a dreamer, a planner, an initiator, an educator, and a diplomat. She has the heart of a warrior, and the soul of a saint. And she deserves to be funded, supported, and treasured for all that she has done, and all that she will continue to do. Exactly what that shall be likely depends upon you and the resources you may provide her. Please be generous.” 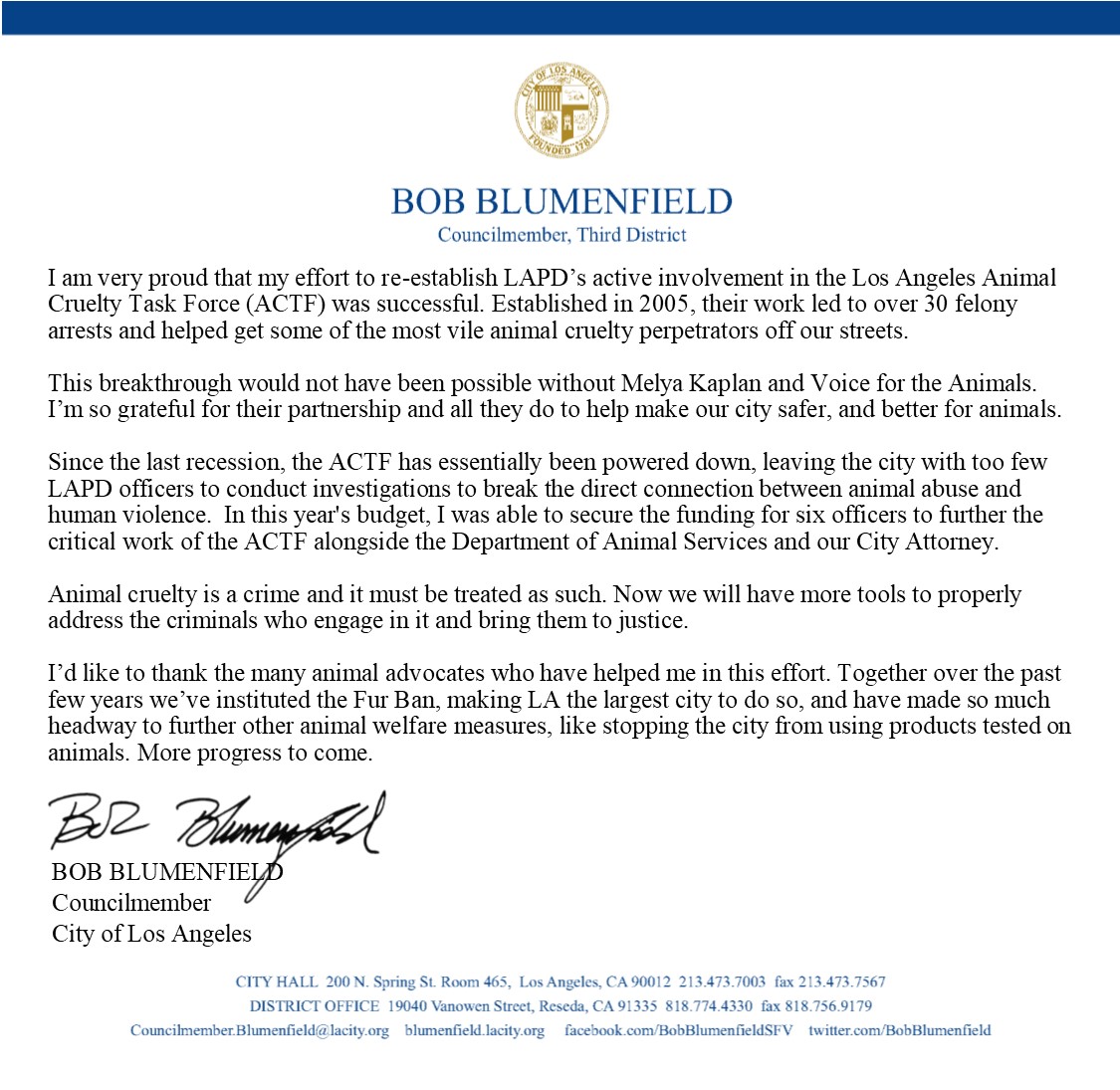 For the second time in 16 years, Voice for the Animal relentlessly and successfully persuaded the LA City Council to fund the LAPD Animal Cruelty Unit.
Some 16 years ago, Melya Kaplan, founder and CEO of Voice for the Animals, learned of the critical need for a specially trained group of LAPD officers whose sole responsibility was the investigation of animal cruelty and neglect. Melya Kaplan worked tirelessly to facilitate discussions, meetings and the eventual funding of the unprecedented LAPD Animal Cruelty Unit. That Unit eventually became part of the newly formed L.A. Animal Cruelty Task Force, comprised of LAPD, the LA City Attorney and LA County District Attorney. That Task Force soon proved its worth with hundreds of prosecutions of animal abusers and neglecters who would otherwise have been held unaccountable.
Most recently, Melya learned of the surprising disbandment of the LAPD Animal Cruelty Unit. Determined to save the Unit, Melya again brought together Council representatives and experts in the field, along with gathering over 167,000 signatures, demanding the restoration of the Unit. Despite grim predictions, the Council relied upon Melya’s petition, data from VFTA and testimonials and support from experts, and overwhelmingly approved funding of a fully staffed LAPD Animal Cruelty Unit.
Kudos to Melya for your continuing efforts to save and protect animals.

Thanks for the great news. I was hopeful that the program would be installed again. Thanks to your great program, we, animal rescues, were able to report cruelty against so many animals in terrorific conditions. There are no words to thank for having the program back. Keep up the good work in the name of alll the animals in peril. God bless!