THIS NON-PROFIT FOUNDER IS HELPING END ANIMAL ABUSE IN GREECE 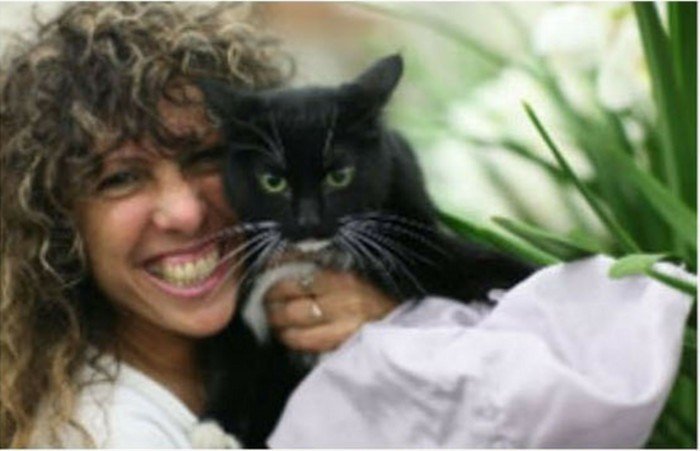 For nonprofit Voice For The Animals’ founder Melyá, Greece is a land of great beauty, heart and history.

But it also was a country where animal abusers weren’t always being brought to justice, in part because some law enforcement and prosecutors weren’t steeped in the signs of animal cruelty or how to make evidence from a cruelty case stand up in court.

Melyá, whose grandmother hails from Ionnina, founded the Santa Monica-based Voice For The Animals in 1999 with a focus on creating a more compassionate world for animals. During a trip back to the country of her roots in 2015, she was devastated to see animal cruelty and neglect— especially given Greeks’ historical record of viewing animals as sentient beings whose lives are worthy of respect and compassion.

Pulling together contacts she had made during previous work on the Los Angeles Animal Cruelty Task Force, she traveled to Greece with two LAPD officers and a speaker from the Virginia Attorney General’s Office in 2015 for a first-ever collaborative conversation, co-organized by the Ministry of Citizen Protection and the Hellenic Police, titled “The Cycle of Violence: From Animal Abuse to Domestic Violence,” in which stateside cruelty experts spoke to a packed house of Greek law enforcement.

Melyá, who gave the conference’s opening speech, reminded the Greek audience of their laudable legacy when it came to animal welfare.

“The famous philosopher and mathematician Pythagoras urged respect for animals, because he believed that humans and non-humans had the same kind of soul,” she told the assembled officers. “Another classical Greek philosopher, Theophrastus, one of Aristotle’s pupils, argued that non-human animals can reason, sense, and feel just as human beings do. Plato, in his Republic (Book II), said the dog has the soul of a philosopher. Plutarch wrote several essays arguing that animals were rational and deserving of consideration and compassion.” 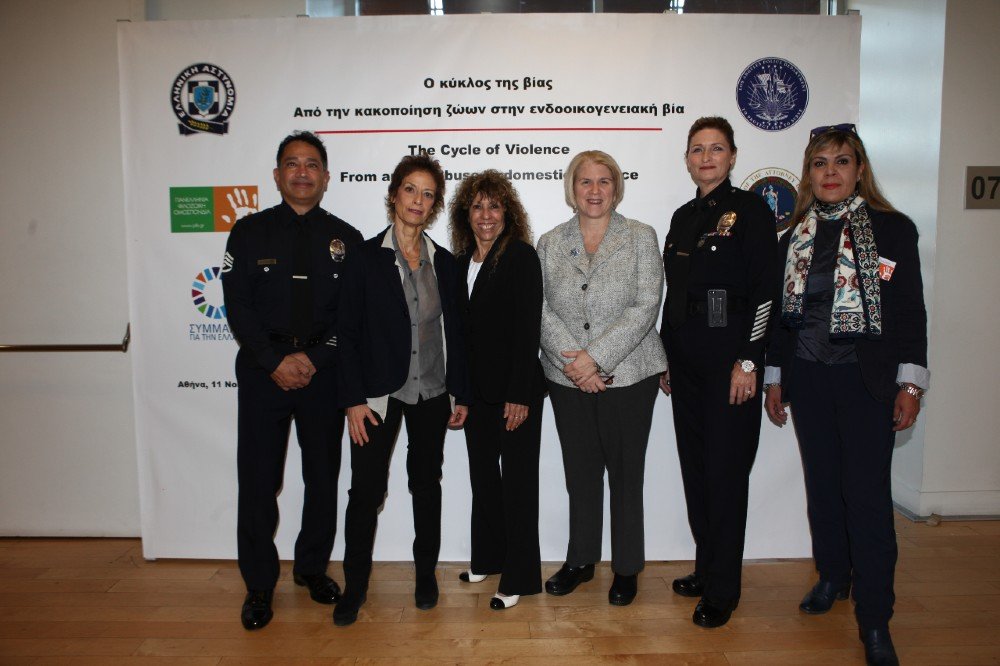 And Plotinus taught that all animals feel pain and pleasure, not just humans, and thus that humans had to treat animals with compassion, she continued.

“The classical Greek philosophers led the way not only to compassion, but also to the roots of crime,” she said.

Deputy Secretary General Janetos Filippakos also underscored the importance and priority of addressing animal abuse, saying that uniformed officers and the Greek police “every day give their best” to prevent animal mistreatment, according to a translation of a press release sent to Lady Freethinker by the Hellenic Police.

The 2015 conference was a pioneering project, said the Chief of Greek Police’s Lt. Gen. Dimitrios Tsaknakis in the press release.

“For the first time, a collaboration is being developed in order to highlight the very important correlations between animal abuse, child neglect and abuse, and domestic violence, as well as other forms of violence,” he said. “Animal abuse has long been recognized as a sign of pathology in the most violent offenders. Many years of research show that this social phenomenon has very deep manifestations and is directly related to almost all illegal and violent behaviors, one of which is family violence.”

Irini Molfesi, the president of the Panhellenic Philanthropy Foundation, praised Melyá’s work as integral to the conference’s success.

“She moved heaven and earth to convince the LAPD Headquarters to send two of their most brilliant officers to speak about the cycle of violence,” Molfesi said in the translated press release. “This is the first time this has happened, and I think we all understand how important this is. I will once again repeat the phrase I heard from a great jurist, which I use at every opportunity: ‘Show me a country where animal protection is low on the agenda and people live protected.’ For the sages of legal science, the protection of animals goes hand in hand with the protection of humans.”

The conference was a success, with officers eager to learn how they could help animals, and a second conference — “The Cycle of Violence: Child Abuse to Animal Abuse” — happened in 2017, Melyá said.

“It was so packed I couldn’t believe it,” she told Lady Freethinker. “The cops were so interested, and they came from all over Greece. Cops care about animals.”

A translation of a social media post by an officer who attended the conference is included on Voice For The Animals’ website. In the post, the officer notes the scientific evidence presented at the conference clearly demonstrated that violence by humans is not confined to humans.

“It has been shown that first the animal was abused, and this abuse led successively to other crimes against a human life by the same perpetrator,” the officer wrote, according to the translation. “The obvious conclusion is that violence will not stop at a specific point, but will go further, will increase in severity, and if there is no intervention, will bring more violence.”

Melyá echoed that chilling reality during her interview, noting one of the presentation’s foci involved cross-reporting, or agencies sharing information to ensure comprehensive and appropriate responses in any given circumstance.

“We would tell the officers that if they go in and see animal abuse, they should also look at the women and children,” she said. “There could be someone else in the house who is being abused.” 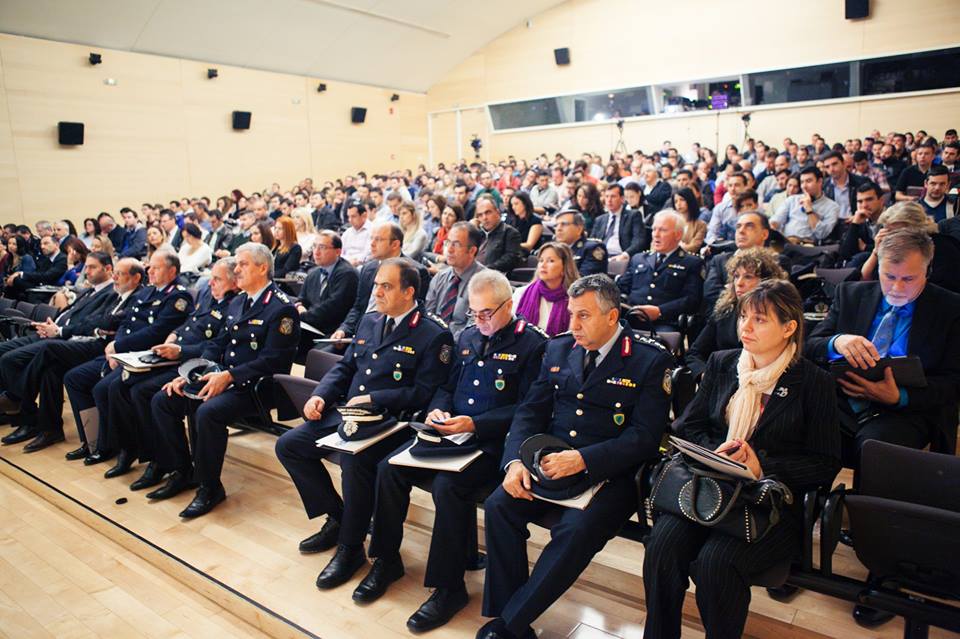 Melyá said her next overseas training will be in Cypress and is currently in the works for October.

In addition to their work in Greece, Voice For The Animals aims to create respect and empathy for animals through education, rescue, legislation and advocacy. Some of their other programming involves a hotline that people can call for advice on what to do in specific cruelty circumstances, a humane education program, an aid program that provides food and veterinary care for people who might not otherwise be able to keep their animals, and a “Working Cats” program, which rescues feral cats and places them.

“We are founded on a belief in the sacredness of all life and seek to eliminate situations where animals are neglected or destroyed,” VFTA states on its website.

Melyá’s advice for people is to never stay silent in the face of suffering.

To learn more about Voice For The Animals or to get involved, visit the nonprofit’s website here. Everyone can help animals around the world by always speaking up when they witness cruelty towards them—their lives could depend on it.