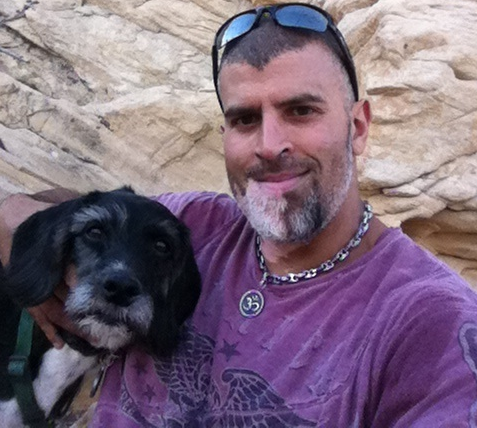 Loving inspiration is why Mike Mahler created the Grover Fund for VFTA.

To support animals in need of rescue.

"I rescued Grover back in 2007 from the Lied animal shelter in Las Vegas. I was drawn to Grover as he reminded me of my dog Mona. My mother was in town visiting so we went to Lied to meet Grover. Grover was estimated to be two years old and at the time was named Bocco.  My mother suggested I rename him Grover if I rescue him which fits him perfectly. In fact whenever people meet Grover, they always say he looks like a Grover!

I remember it like yesterday when I picked Grover up. On the drive back he couldn't stop staring at me trying to figure me out He was a very pensive and nervous dog which is understandable given he was abandoned by his last family. Regardless, by the time we got home, Grover realized I am a good guy and insisted on being my shadow at all times. Even while I am typing this, he is sitting next to me. We bonded quickly and he is always disappointed when I leave the house without him.

Grover was underweight and looked like an old man when he first arrived, but within a month of being in a calm stable environment with good food and exercise, he filled out nicely and became a very handsome dog.

I realized early on that Grover is very athletic and high energy and just a walk around the block was not gong to cut it. Thus, we started sprinting several times per week which was fantastic for both of us. Fast forward to 2016 and sprinting is still a part of our routine. Grover is also an avid hiker and loves going to Red Rock.

Grover has protective instincts and once chased off a coyote that was stalking his younger Maltese brother Mickey. Ironically, Grover's previous guardian stated Grover was relinquished because he snaps at kids. Nothing could be further from the truth. Grover is very friendly to kids and kids naturally gravitate towards his fun loving personality. He is quite a celebrity in our neighborhood and more people know his name than mine.

The bond between a dog and person is a very special one and I think people that never rescue an animal in need are really missing out. They definitely make our lives much fuller and I am glad that Grover and I can pay it forward and help other animals in need. "